(Ettlingen – Ingrid Rilling)
We had a spontaneous change of curriculum in forms 12e and 12f today when we decided that Shakespeare can wait. Imagine our delight when we discovered that a former American soldier, Robert Reynolds, had dropped in with his daughter Kathrine to see the barracks where he had lived thirty years ago. As a combat engineer, he was stationed in Ettlingen for three years, from 1979 to 1982, and was living in the American barracks, which is now our school building. He and his daughter enjoyed the short tour of the building and were interested to find out about the changes that had taken place. Robert and our pupils asked each other questions, but he also related interesting anecdotes and gave us information on the time he had spent in Germany. Being a true New Yorker from the Bronx, used to the hustle and bustle of city life, Robert told us about the shock he felt when he arrived in Germany, in the ‘countryside’. At the Italian restaurant down the road, he wondered why the pizzas were served whole with a knife and fork; in NYC, they were served sliced and were eaten by hand. Amongst many other tasks, he spent some time in Stuttgart building a racquetball court for the soldiers. Our pupils were surprised to hear that there were localities, which would not allow American soldiers on their premises. They found it touching that he gave them wise advice such as the importance of diligence in pursuing their aims in life, and always being careful and aware of where you are and who is around you, so that you come to no harm. Robert highly recommended a visit to the Big Apple and ended his visit by wishing everyone success in their studies and thanking us for the opportunity to speak to these young people. This certainly was living history and a visit to remember! 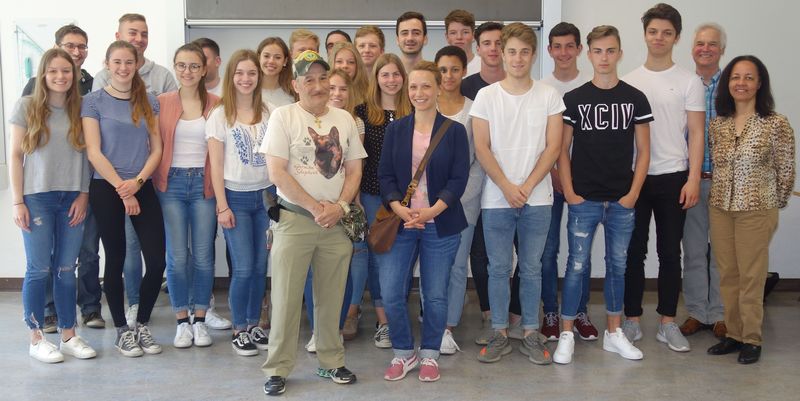